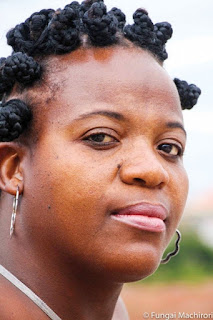 Her novels include The Madams, Men of the South, Behind Every Successful Man, and her most recent, London Cape Town, Joburg, which won the K Sello Duiker Prize.

She’s also written two children’s books: Jama Loves Bananas and Refilwe.  She is active in numerous Pan-African writing initiatives including being on the board of Writivism, a judge for the Etisalat Prize, and a judge for Bessie Head Short Story Prize for two years in a row.

She is one of Africa39, a list of African writers under 40 years of age who the Hay Festival organisers believe have talent and potential to define the trends of literature from the continent. I was happy to have a chance to ask her a few questions about her career and her activism on behalf of African literature.

Zukiswa: Look at you starting with the difficult questions. I think there can be cultural appropriation if writers in particular and artists in general fail to do due diligence and have enough research on their work of art. My little thing is that I tend to seek, among my readers when the book is still a first draft, at least three people who may have similarities or be familiar with the background of my character so I get that little edge in where authenticity is concerned. That said, it amuses me to no end how social realism, as a fiction genre, always requires one to be more realistic than creative nonfiction.

Me: Are you the human definition of the Pan Africanism? Is that important to you?

Zukiswa: I probably need to stay in Brazil before I can be the human definition of a Pan-African but yes, as a social observer, it is pretty important to me. The downside is that in some ways, I am always an outsider-looking in but it’s also very much the upside because all these countries have been generous enough to allow me certain intimacies with them that are not often given outsiders.

Zukiswa: I recently did a keynote at the Fourth Writivism Literary Festival and I explained why I feel these initiatives are

important. In short, I think given the space that we are in as writers in Africa, our literary landscape has never been as fruitful as it is now. For that reason, we need to ensure that those of us with voices let others know about the exciting works that are coming from here. When other writers win, all writers win and the continent wins. Because more readers means more people who question. It is that simple to me.

Me: Do African writers have to be published overseas to be considered a success?

Zukiswa: I think this has been the case for a long time but this is changing. I know book clubs that I introduced some books published on this continent to and they loved them so much they now read African-published literature frequently.

Me: In a perfect world what would your writing career look like?

Zukiswa: I think it would look mostly like it does now but with a monthly salary for my bills because someone would have recognised that what I do is work. I know Lorenzo and Catherine de Medeci, less as members of the Florentine ruling family and more for being patrons of the arts... maybe this is something our African billionaires and gazillionaires should think of (sends a message out to the universe that Dangote, Motsepe and company read this). Their legacy would live forever.  It saddens me that Miles Morland is doing something that African philanthropists should be doing with his grant. And that none of them have seen why it’s necessary that they have something similar or better.

Me: What one thing could our publishers on the continent do to make our lives as writers living and writing here easier and more lucrative?

Zukiswa: There still needs to be better work done by publishers on the African continent on editing (some books have atrocious editing) and distribution. It breaks my heart that it is still easier to get a book that is published in the United Kingdom when one stays in Kenya than getting one published in Uganda or Tanzania, which are neighbouring countries.  They need to do better on this because, no matter how well-written the books are, so long as readers in different African countries do not have access to them, African writers published on the continent may as well not be writing.

Me: What are you working on at the moment?

Zukiswa: A travel memoir and a historical fiction novel.
Posted by LitMag at 23:55:00 No comments: