Why You Should Get This Book 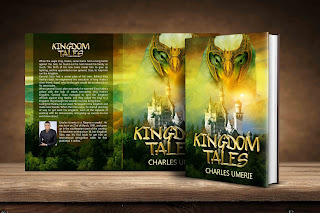 Kingdom Tales is sometimes labelled a fairy story, but it’s far from that. It’s an allegory to the events that took place in Africa after most of the African nations were free to rule themselves. It was a time plagued with wars and coups, and the author of Kingdom Tales did an amazing job retelling those stories using animals.

It was written in an elegantly simple style, and the author, Charles, used the animal kingdoms as a metaphor for the African nations. The story started when King Hasha (Eagles’ king), the ruler of Mountain Kingdom defeated the Cave Kingdom (the Bats) in their quest for a legendary Dark Staff. In real life, this Dark Staff can be a total freedom or independence; because in African folklores, staffs always signify independence or having authority.

Then in the Mountain Kingdom (Eagles’ home), Charles made us to understand that even though the kingdom is strong, it still received support from the ‘creepy’ Falcons who aren’t part of the kingdom. This can be analyzed as the support most African nations got from their colonial masters, which they didn’t believe were genuine supports, rather as a way their masters hoped to exploit them more.

Also while the Mountain Kingdom, Cave Kingdom, and the Forest Kingdom were all searching for the Dark Staff (total freedom), they were also plagued with internal issues. King Hasha lost his throne to one of his soldiers, and was exiled to another kingdom for some time. Something of that nature also happened to the Bats’ king. This could be the time African nations were plagued with coups, civil wars and genocides.

Even though this novel is politically minded, it’s still very entertaining for kids to enjoy. The author has a good sense of humour and great writing style. When I first read it, I really enjoyed it as a fairy story about animals fighting for supremacy, not knowing it represented something deeper. That’s why I say it’s safe for kids to read too.

Charles was able to add African folklore and medieval feel to it too, so anybody from anywhere can totally enjoy the book. And it’s a quick read too. Very classic.Visit www.charlesumerie.com.ng