On the road: Nobel laureate Soyinka to teach in South Africa 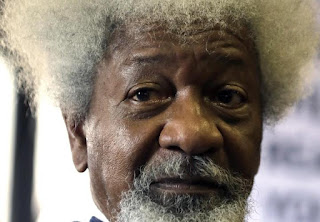 JOHANNESBURG – Nobel laureate Wole Soyinka says being a traveling teacher has become “a way of life” as he takes up a post as visiting professor at the University of Johannesburg.
The 83-year-old Nigerian playwright and author told students and journalists at the South African university on Friday that the benefit of encountering different cultures during his journeys is that “one does not stagnate.”
Soyinka, who was awarded the Nobel Prize in literature in 1986, has lectured at universities around the world. He said he and his Johannesburg students might create a play together, as well as discuss history and international relations along with literature.
“Absolutely nothing is outside the scope of my interests in this interaction,” Soyinka said. He drew laughs when he added: “What I don’t know, I’ll pretend that I know.”
The university said it hopes Soyinka’s periodic presence on campus will boost plans to set up a creative writing program.
South Africa is a traditional hub of migrant literature and art, including theater, according to Soyinka. A fierce critic of past Nigerian military rulers, he was jailed in the late 1960s during the country’s civil war.
“I am very much an itinerant teacher,” Soyinka said. “And so moving from one institution to the other has become a way of life, not planned as such, but that’s the way it happens.”