JOHANNESBURG - Set in middle-class Johannesburg, Catching Feelings is a story of how art, love and life come together. Written and directed by Kagiso Lediga, the film follows a jaded academic and his journalist wife, who have their lives turned upside down when a celebrated and hedonistic older writer unexpectedly moves into the home with them.
The film, which opened in South African cinemas on 9 March, stars Lediga alongside Pearl Thusi, award-winning Akin Omotoso and acclaimed actor and playwright Andrew Buckland. It also features Loyiso Gola, Precious Makgaretsa, Ntosh Madlingozi, Kate Liquorish and Celeste Ntuli.
I asked the guy at the counter when I was getting my ticket how the movie was doing and he said: “It’s a very busy movie.” Understanding this as: A lot of people are coming to see it.
Inside the cinema, I hear laughs within the very few first minutes of the movie. Kagiso is a comedian and this comes across in his writing.
Catching Feelings is packed with familiar faces, places and spaces. If you are a Joburger, you will recognise the Bannister Hotel in Braamfontein, 7th Street in Melville, Maboneng precinct, Soweto, Parkview and Joubert Park.
African music is heard at the right scenes throughout the film.
I asked the actors a few questions and below is what they had to say.

Kagiso Lediga
Q: Your main characters are a professor and a journalist. As the writer, why did you give them those professions?
A: I thought the university environment would be a great setting. And I wanted it to be a lot about characters with different ideas and opinions that are not set in stone. Academics and writers tend to have strong opinions that are not permanent.
Q: Did you write with the “person you are going to cast” in mind?
A: Mostly yes, but then other people ended up being better than who I had in mind.
Q: You have said this is "dark" comedy, why is it classified as that?
A: Compared to other rom-coms it is not as lighthearted, funny yes, but not lighthearted.
Q: I am also interested to know what birthed the concept of the film.
A: I Wanted to do a film set in Johannesburg about 30-something-year-olds grappling with relationships and general existence.
Q: The professor struggled with getting back to his writing. I know the film ended … but sometimes the characters continue to live after the movie, for some people, such as those with overactive imaginations, like, ahem. Ok, fine. Yes, like some of us. Or maybe just me. So is he going to stay home and write or is he going to join his wife at the concert?
A: After the concert, his wife will go to Asia and he’ll spend most of his days writing in coffee shops and being a guest columnist for newspapers. We hope he finishes his next novel.
(I see I’m not the only one who thinks some characters in certain movies continue to live even after the movie has ended. The style of writing and the story also contribute a lot to this belief.) 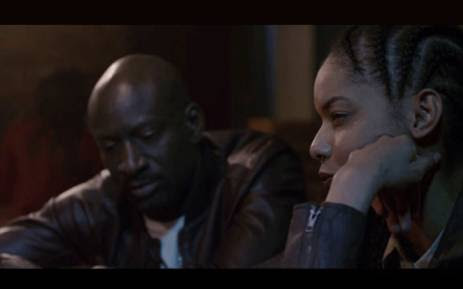 Precious Makgaretsa
Q: Tell us about your character. Who is that woman and why is she so angry?
A: Her name is Lazola Yoko. She is a feminist poet, writer and enthusiast of African literature. She is angry about child abuse, particularly paedophiles, rapists and parasite men who prey on vulnerable women and girl-children. 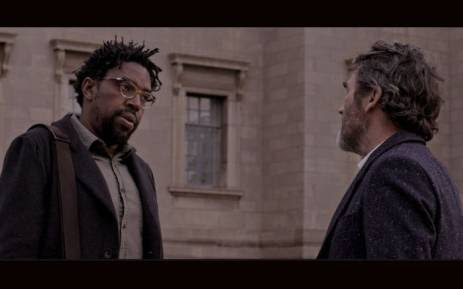 Andrew Buckland
Q: What was your best part (which you were in) in the film?
A: I think my favourite scene in the film to play was the final confrontation with Max which culminates with him punching me in the nose. Fantastic writing.

Akin Omotoso
Q: What made you wear your actor’s hat for this film?
A: Kagiso shared the script with me and I loved it and loved the character and was excited about working with him and the wonderful cast and crew. It was a lot of fun.

Motheo Moeng (Director of Photography)
Q: There were quite a lot of creatively captured shots. I picked up a love for nature there.
A: Yeah, I love nature. I’m into natural products overall. But the idea of the shots was to display the versatile side of Johannesburg as a city. So we shot the green suburbs, the concrete bustling CBD as well and the vibe of the locations.
Q: Tell us about your experience working on the film.
A: My experience on working in the film was pretty profound. I moved into Kagiso’s house for the period of the shoot just so we could discuss things every chance we had - even after we wrapped. We also shortlisted every shot in the film because we knew we had to do intense preproduction to achieve the visual style we wanted, which is something I hadn’t done on other films I made. Overall, I felt a huge responsibility too because the director was also the lead actor so he relied extensively on me to be his eyes during takes where he was on screen.
Q: You went to film school, right? How was that like for you?
A: Yeah. I was fortunate enough to go to film school immediately after photography school. I really enjoyed film school as I feel I learnt the basics that gave me a base to try different things out later. Also doing treatments helps you overstand visual language in a more educational manner so that you can justify easier when you break the rules.
By 22 March, the film had made R871 720. Let’s admit, it seems a lot of South Africans still have a long way to go when it comes to watching and appreciating our own stories and SA-made films.
After seeing the film, arts writer Kgomotso Moncho-Maripane said: "There are local films that mirror Hollywood inspirations unintentionally. Catching Feelings in its contemporary milieu aspires to be nothing else but a South African film. Its romantic visuals of the Johannesburg metropolis are charming. And although the political content feels like what Kagiso Lediga would deliver in his stand-up comedy act, it still resonates."
Catching Feelings will show in cinemas for as long as people are watching it. Three words: Go see it.
Apart from the spirit of "supporting local", seeing the film will show you how far SA filmmakers have come, paving the way for even more brilliance to come.