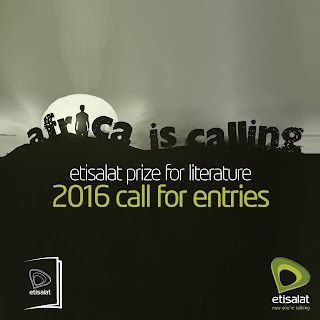 Everyone can see just how committed we are in driving culture and the values of excellence and empowerment that we stand for. The prize empowers, giving first writers the chance to excel and it also helps publishers support their business.

We want to empower people”. Zimbabwe’s NoViolet Bulawayo won the maiden edition of the prize with her highly celebrated debut novel, We Need New Names while Songeziwe Mahlangu emerged winner of the second year of the prize with his novel, Penumbra.

The Etisalat Prize for Literature is designed to foster writing in Africa, bring exciting new African writers to the attention of a wider audience, and promote reading among the populace.

The winner receives a cash prize of £15,000 in addition to a fellowship at the prestigious University of East Anglia, U.K. under the mentorship of the award-winning author, Professor Giles Foden.

The judges this year will be Kenyan Zikiswa Wanner, Nigeria’s Molara Wood, with Ghana’s Toronto University professor of English, Ato Quayson, as chair of judges.   This prize accepts submitted works which must be a writer’s first work of fiction over 30,000 words, and published within the last 24 months.
The Etisalat Prize will also launch the online-based flash fiction prize later in the year to engage the rising stars of fiction. Wanner commended Etisalat’s revolutionary approach in its support for cultural productions on the continent.

She said until Etisalat came there was no pan-African prize for literature, and was hopeful that one of the continent’s universities “will be revolutionary enough to do a pan-African Fellowship for writers”.
Wood said, “What Etisalat is doing is a huge deal to carry pan-African multiplicity of voices. I hope it becomes the standard for others to follow and help carry Africa’s voices”.
Wood also hoped that the prize would help drive literary production locally. One of the prize’s patrons, Prof. Kole Omotoso stressed the need to build roads and not just bridges across Africa, as symbolized by the prize.

He recounted how winner of the last edition Mahlangu was being celebrated in South Africa for getting a continental endorsement of his work.
Also Director, Brand and Experience, Etisalat Nigeria, Mr. Enitan Denloye, said the prize was about identifying talent and investing in them and helping young people achieve their potentials.
He invited publishers to come up with ideas how they could be helped to enhance their businesses. Rules and guidelines for entry are available at prize.etisalat.com.ng
Posted by LitMag at 03:02:00