Many kegs of ‘Palm Wine’ 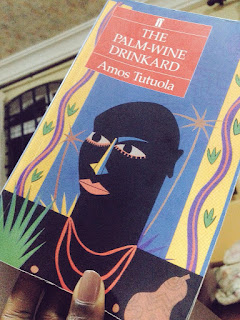 The power of the Nigerian writer, Amos Tutuola’s (in pic) The Palm-Drinkard, the first African novel to find international literary readership, after its publication in 1952, can be immediately felt. Written in English, and rooted in the Yoruba folk story tradition, the slim novel became a sensation soon after it appeared in England and is now acknowledged as a foundational novel in modern African literature.

Sample the initial paragraphs from The Palm-Drinkard:

“I was a palm-wine drinkard since I was a boy of ten years of age.

“My father got eight children and I was the eldest among them, all of the rest were hard workers, but I myself was an expert palm wine drunkard… I was drinking palm-wine from morning till night and from night till morning. By hat tie I could not drink ordinary water at all except palm-wine.

“So my father gave me a palm-tree farm which was nine miles square and it contained 560,000 palm trees, and this palm-wine tapster was tapping one hundred an d fifty kegs of palm-wine ever morning, but before 2 o’clock pm., I would have drunk all of it; after that he would go and tap another 75 kegs in the evening which I would be drinking till morning.”

The happy state of affairs wasn’t to continue for long. The palm-wine tapster fell down from the palm tree and died. Not finding any one who could tap palm-wine “to my requirement,” and remembering that “old people were saying that the whole people who had died in this world, did not go to heaven directly, but they were living in one place somewhere in this world,” the novel’s hero sets out to find out “where my palm-wine tapster who had died was.”

What follows is an intoxicatingly rich adventure, where humans, strange creatures, and spirits come and go with perfect ease. The rapid, yet unhurried, turns of event, all told in a hypnotic oral story-telling style which freely and masterfully bends English to serve its purposes, is nourishment itself.

Tutuola’s short autobiographical note, which appears as an Afterword to The Palm-Drinkard, tells us he had a tough childhood. His father sent him to work as a servant in an acquaintance’s house in Lagos, a town sixty kilometres from their native village of Abeokuta, in return for a school education. The young Tutuola did exceptionally well at school, but his master’s wife’s cruelty, which constantly loaded him with household chores, proved hard to endure. He went back to his father’s village and joined school there. After a year, his father’s sudden death didn’t let him continue his studies: “Now there was none of my family who volunteered to assist me to further my studies.” His formal education ended at the sixth grade, Tutuola worked odd jobs on the farm and elsewhere from then onward. Not having completed his formal education, Tutuola has noted, meant being able to work with a freer narrative imagination.

TS Eliot, the poet, acquired the manuscript for publication with Faber and Faber. The influential part played by Irish poet, Dylan Thomas’ high praise for the novel, is also well known. His review in the Observer entitled, “Blithe Spirits,” begins thus: “This is the brief, thronged, grisly and bewitching story, or a series of stories, written in young English by a West African about the journey of an expert and devoted palm wine drinker,…” An excerpt from Thomas’ review, in fact, forms the epigraph in the Nigerian writer, Wole Soyinka’s affectionate introduction to the latest edition of The Palm Drinkard. Soyinka speculates that being Irish, who had “not completely severed their umblical cords from the earth of magic, fantasy, trolls, gnomes and goblins,” might explain the poet’s enthusiasm for the novel.

The debates on the novel’s reception have been charged. Was the West seeking exotica in it? Would aspiring modern African writers be expected to dish out similarly strange narrative forms? The questions would have been especially urgent in the time of decolonization, when .writers in English from formerly colonized countries wrestled with the kind of English to write for giving authentic expression to their cultural experiences.

Sixty five years later, with the advantage of abundant caution about avoiding stereotypy, the many pleasures of The Palm-Drinkard can be enjoyed more freely. The inventiveness of new words and styles of phrase are liberating: as Soyinka points out, the word “drinkard” does away with the negative morality that sticks to the word “drunkard.”

Drawing attention to the continued appeal of The Palm-Drinkard, Soyinka says “Who can conceive of the sea drying up? As long as there is a drop of wine left to tap from the West African palm tree, Amos Tutuola lives on.”

(The author teaches at Azim Premji University, Bengaluru)
Posted by LiteMag at 05:54:00